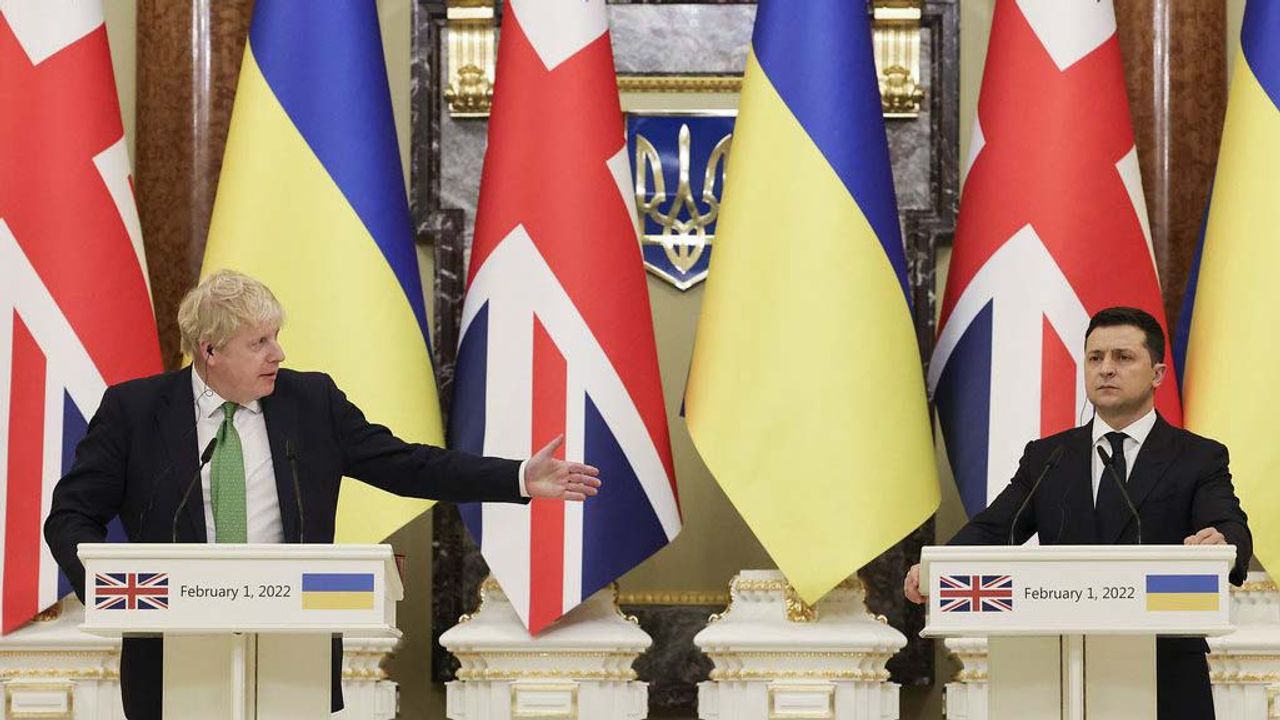 Boris Johnson continues to respond to the crisis facing his post as Prime Minister by stepping up the UK’s involvement in the US war campaign against Russia.

After again rejecting calls for his resignation following the ‘partygate’ scandal in parliament on Monday, Johnson flew to the Ukrainian capital Kyiv yesterday, where he met President Volodymyr Zelensky for talks at the Mariinsky Palace.

He tweeted ahead of his trip: “As a friend and democratic partner, the UK will continue to defend Ukraine’s sovereignty against those who seek to destroy it.” In his opening statement to press conferences following the talks, he warned of “perhaps the greatest display of hostility towards Ukraine in our lifetime”.

Johnson boasted of Britain’s pole position in the anti-Russian campaign. “The UK and other countries will be judged by the Ukrainian people and the world on how we respond and how we help,” he said, and it was “absolutely vital that the government British act now”. [and] bring together our friends and partners in the West as we are.

But his efforts to strike a Churchillian pose on the world stage quickly ran into trouble. In a rare example of journalistic skill, the first questions posed to Johnson by the BBC were: “Have you done enough to survive? Have you done enough to persuade enough colleagues to save your post as Prime Minister? And on the question of Ukraine, why should the international community take your diplomacy seriously when you are so preoccupied at home that you put talks with MPs ahead of talking to President Putin? »

Johnson had been forced to cancel a scheduled phone call with Putin on Monday to discuss the release of senior civil servant Sue Gray’s investigative report into parties held in Downing Street during the pandemic shutdowns. The call with the Russian president was rescheduled for today after Putin declined a request for Tuesday.

The same journalist asked Zelensky: “Do you believe that the Prime Minister and his American allies are exaggerating the threat from Russia?

It was a pointed reference to the recent public clash between the Ukrainian President and US President Joe Biden, with the US insisting that a Russian invasion was imminent and Zelensky responding that it was not the assessment of his government and telling the NATO powers not to cause “panic”. .

Zelensky faked his answer to spare Johnson’s blushes but did not reverse his previous statements, replying, “In terms of overstating or understating threats, your question is difficult to answer. No one can predict or know what will happen next.

Johnson was put on the defensive and forced to revisit the issue later in the conference.

“I think someone asked a question earlier: ‘Were we exaggerating the threat, were the US and UK somehow trying to make it worse?’ I have just said that it is not intelligence that we are seeing. There is a clear and present danger. We are seeing large numbers of troops massing; we are witnessing all manner of operations consistent with an impending military campaign. .

Claims of untold ‘intelligence’ seen by British officials and ‘clear and present danger’ are reminiscent of nothing so much as Britain’s role in 2002-2003 as bagman for the US war on Iraq, justified by false allegations of an imminent threat of Mass Weapons Destruction.

The UK is directly responsible for the most widely discredited ‘intelligence’, saying a Russian invasion is imminent, with the Foreign Office’s January 22 press release claiming that Putin’s government was ‘seeking to install a pro-leader -Russian in Kiev as he planned to invade and occupy Ukraine.

That wasn’t Johnson’s only embarrassment over Ukraine. On Monday, his Defense Secretary Ben Wallace took part in a joint press conference with his Hungarian counterpart Tibor Benko.

Wallace attempted to further point to NATO plans to send additional battlegroups to Romania, Bulgaria, Slovakia and Hungary, saying it was “important to signal to Putin that the very thing he feared, that is to say more NATO near Russia, would be the consequence of the invasion of Ukraine… That is why the United Kingdom offered NATO more ground forces , more preparation as a deterrent.

But at the same conference, Benko refused the deployment of NATO troops in Hungary. The country’s president, Viktor Orban, visited Moscow yesterday for high-level talks with Putin.

Johnson’s performance at yesterday’s press conference made it clear that his response to these setbacks will be to double down on the UK’s commitment to imperialist aggression.

With the usual hypocrisy, he claimed that Russia was trying to “re-draw the security map of Europe and impose a new Yalta, new zones of influence” by “pointing a gun to the head of Ukraine “. It was NATO that “redrawn the security map of Europe” by advancing hundreds of kilometers to the Russian border, and NATO that used Russia’s demand for this threat to its security is withdrawn as a pretext for a massive militarist campaign.

Demanding that Russia “step back and choose the path of diplomacy”, Johnson clarified that this meant recognizing Ukraine’s right to decide “which organizations it aspires to join”, i.e. the NATO.

He also threatened that if a conflict is provoked, “Ukraine will fight…There are 200,000 men and women under arms in Ukraine, they will put up a very, very fierce and bloody resistance.” Johnson continued, “I think parents, mothers in Russia should think about that.”

He once again turned to nationalist bragging, saying: ‘Since 2015 the UK has trained over 22,000 Ukrainian servicemen and provided £2.2 million worth of non-lethal military equipment to the Ukraine. Two weeks ago we sent anti-tank weapons to bolster Ukraine’s defenses go further, and today I announced £88m of additional UK funding to support good governance and energy independence .

There are currently around 100 British personnel in Ukraine who are still undergoing military training.

Last week Ukraine’s parliament ratified a £1.7bn loan from the UK to fund the development of the country’s navy, including two minesweepers, eight gunboats, a frigate and other infrastructure naval.

Zelensky also pointed to the “high risk for anyone trying to occupy even a tiny part of our territory,” adding the warning: “It will be a European war, a full-fledged war.”

The danger of a rapidly expanding conflict has been underscored by the official announcement of a trilateral alliance between the UK, Ukraine and Poland. Ukrainian Foreign Minister Dmytro Kuleba said: “We cannot expect security and prosperity somewhere in the future when we become members of the EU and NATO. We need it today. »

During a meeting last week of the Ukrainian and Polish Prime Ministers, Polish Prime Minister Mateusz Morawiecki said: “Living near a neighbor like Russia, we have the feeling of living at the foot of a volcano”, and promised to supply Ukraine with mortars, artillery ammunition, air defense systems and surveillance drones.

2022-02-02
Previous Post: War against Russia: three crucial reasons why Vladimir Putin might want to invade Ukraine | World | News
Next Post: For NATO, the threat of war between Ukraine and Russia has become clearer