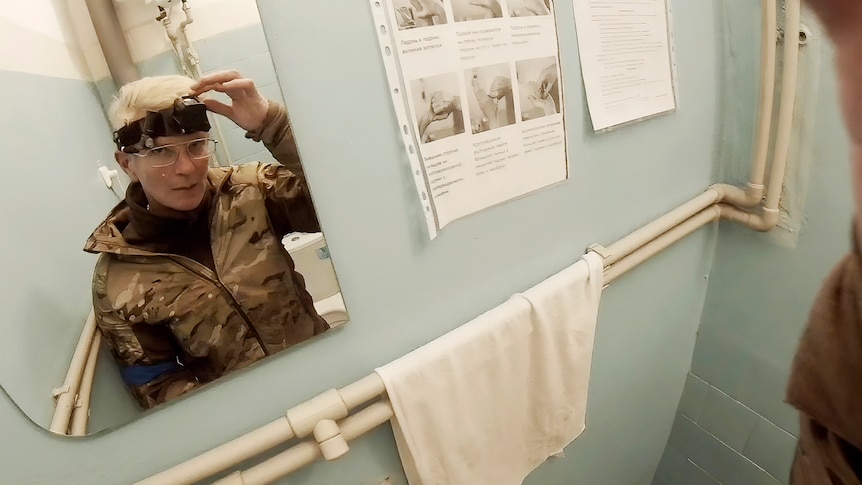 A famous Ukrainian doctor recorded his stay in Mariupol on a data card no bigger than a thumbnail and smuggled it into the world in a tampon. Now it is in Russian hands, at a time when Mariupol itself is about to fall.

Yuliia Paievska is known in Ukraine as Taira, a nickname from the nickname she chose in the World of Warcraft video game.

Using a body camera, she recorded 256 gigabytes of her team’s frantic two-week effort to bring people back from the brink of death.

She handed the harrowing clips over to a team from the Associated Press, the last international journalists in the Ukrainian city of Mariupol, one of whom got away with it in a tampon.

Russian soldiers captured Taira and her driver the following day, March 16, one of many enforced disappearances in areas of Ukraine now held by Russia.

Video shows Russian soldiers being taken out of an ambulance

Russia has portrayed Taira as working for the nationalist Azov Battalion, in line with Moscow’s narrative that he is trying to “denazify” Ukraine.

However, the AP found no such evidence, and friends and colleagues said she had no connection to Azov.

The military hospital where she led casualty evacuations is not affiliated with the battalion, whose members have spent weeks defending a sprawling steel plant in Mariupol.

The footage that Taira recorded herself testifies to the fact that she tried to save wounded Russian soldiers as well as Ukrainian civilians.

A clip recorded on March 10 shows two Russian soldiers being dragged out of an ambulance by a Ukrainian soldier.

One is in a wheelchair. The other is on his knees, his hands tied behind his back, with an obvious leg injury. Their eyes are covered with winter hats and they wear white armbands.

A Ukrainian soldier insults one of them. “Calm down, calm down,” Taira told him.

Learn more about the Russian invasion of Ukraine:

A woman asks him: “Are you going to treat the Russians?”

“But I couldn’t help it. They are prisoners of war.”

“It’s not about saving a particular woman”

Taira is now a prisoner of the Russians, one of hundreds of prominent Ukrainians who have been abducted or captured, including local officials, journalists, activists and human rights defenders.

He said some of the victims may have been tortured and five of them were later found dead.

The office of Lyudmila Denisova – Ukrainian parliament commissioner for human rights (or ombudsman) – said it received reports of thousands of missing people in late April, of whom 528 were likely captured.

His office also said Russian troops were also targeting doctors and hospitals, even though the Geneva Convention distinguishes between military and civilian doctors for their protection “under all circumstances”.

The World Health Organization has recorded more than 100 attacks on health facilities since the start of the war, a number likely to rise.

More recently, Russian soldiers removed a woman from a Mariupol convoy on May 8, accused her of being an army nurse and forced her to choose between letting her 4-year-old daughter accompany her to a destiny unknown or continue to Ukraine. controlled territory.

The mother and child became separated and the baby girl arrived in the Ukrainian town of Zaporizhzhia, UN officials said.

“It’s not about saving any particular woman,” said Oleksandra Chudna, who volunteered as a doctor with Taira in 2014.

“Taira will represent the doctors and women who have gone to the front lines.”

Taira’s situation takes on new meaning as Mariupol’s last defenders are evacuated to Russian territories, in what Russia calls a massive surrender and Ukraine calls a mission accomplished.

Russia says more than 1,700 Ukrainian fighters have surrendered in Mariupol this week, bringing new attention to the treatment of prisoners.

Ukraine expressed hope that the fighters could be exchanged for Russian prisoners of war, but a Russian official said, without evidence, that they should not be exchanged but tried.

Volodymyr Zelenskyy’s government says it tried to add Taira’s name to a prisoner swap weeks ago.

However, Russia denies holding her, despite her appearing on TV channels in Ukraine’s breakaway Donetsk region and on Russia’s NTV network, handcuffed and with a bruised face.

The Ukrainian government declined to speak about the case at the request of the AP.