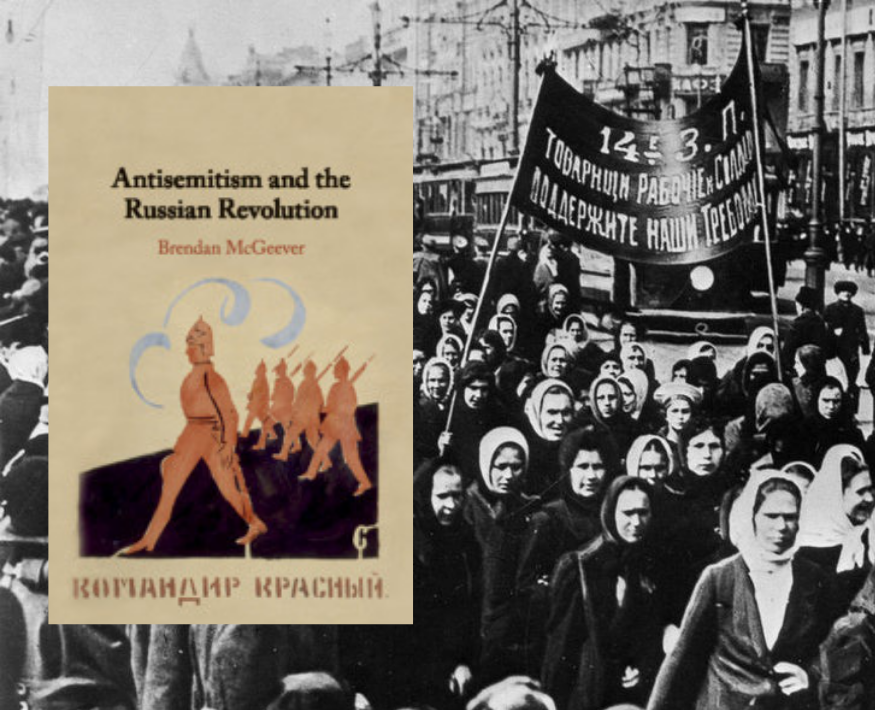 Anti-Semitism and the Russian Revolution

Anti-Semitism is an evil that has dogged the Russian Revolution since its inception.

It was deeply rooted in the Tsarist autocracy, deliberately encouraged over the centuries by 140 anti-Jewish laws and underpinned by Church teachings. Like the untouchable caste in Hindu society, Jews were forced to perform taboo tasks in feudal society, while being branded as outcasts and ghettoized.

They were the commercial intermediaries between the lords of the manors and their serfs. The Jews were the disgruntled traders who kept the essential cogs of agriculture turning while being accused of shrewd bargaining and usury.

Victor Serge spoke of anti-Semitism as an evil spirit which “was the enemy, the counter-revolution”.

The revolutionaries “felt it all around us, on the lookout, looking for our weakness, our mistakes, our follies, making us stumble skilfully, ready for the slightest failure to swoop down on us and tear us apart”.

Brendan McGeever has done history a great service by exposing many of the mistakes of the Bolsheviks in the fight against anti-Semitism. He highlights the exemplary work of many Jewish socialists, members of the Bund, Poalei Zion and other parties to advance the Bolsheviks.

His research is admirable, but some of his conclusions and emphases are at odds with the evidence he presents.

At the start of the revolutionary uprising, in February 1917, the Bolsheviks had 24,000 members. By the time of the October Revolution, more than 200,000 people had joined, bringing with them all the mixed consciousness of the workers and the poor of the Empire.

Karl Marx wrote about revolution in The communist manifesto“All that is solid melts into the air, all that is holy is profaned, and man is finally compelled to face with sober senses his real conditions of life, and his relations with his own.”

This is how during the Russian Revolution, all parts of society, including revolutionaries, workers, peasants and intellectuals, were plunged into turmoil and forced to relate to each other. All positive and negative lessons on how human beings can change themselves through the revolutionary experience of the changing society have been brought out.

From the start, the Bolsheviks ruled essentially on an emergency basis. For example, they had to retain Tsarist officers to lead Red Army detachments and forge alliances with unreliable elements, with sometimes disastrous consequences.

The worst area of ​​anti-Semitism was the so-called Pale of Settlement, the area in Eastern Europe in which the Tsars had decreed that Jews could live. Ukraine was the major center.

To the west of Ukraine was Hungary, where the only successful socialist revolution after the October Revolt existed between March and November 1919. The Bolsheviks made every effort to force their way through and bind themselves to this revolution.

However, the legacy left by tsarism in Ukraine was a powder keg of ethnic and class hatreds. The peasants were almost entirely Ukrainians who hated the landlords and the aristocracy, but also felt nationally resented by the ethnic minority Russian workers in the industrialized urban centers.

The Jews, originally confined to the economic functions of commerce and small crafts, had begun to constitute a significant part of the working class as it developed.

This pressure cooker of class and nationality antagonism exploded during the Civil War period and the Jews suffered greatly. Some of the pogroms (McGeever says about 8% of them) were committed by Red Army detachments.

Although relatively few in number, these were not minor misjudgments by exhausted soldiers, but murderous bombings that put revolutionaries to shame.

It is the nationalist organizations of the Jewish left that have raised the tone of this situation. Although the Party leadership reacted, at key moments organizing efforts were interrupted by reactions to other events.

In 1919, Ukraine was a boiling cauldron of violence. White army forces fought red formations, foreign armies invaded, and bandit leaders declared themselves white one moment, red the next, then changed sides again.

“Pogromist violence at this time,” says McGeever, “depended heavily on the support and participation of local Ukrainian peasant populations, whose political loyalties could (and did) change on a regular basis.”

Simply put, the peasants supported the Bolsheviks insofar as they allowed the confiscation of land from landlords. But they balked at a stable alliance with the urban Russian working class and they seethed with resentment at the forced grain requisitions the Bolsheviks had had to resort to during the Civil War.

Nikifor Grigoriev was the worst Ukrainian pogromist. A talented military leader, he managed at one time or another to fight on all sides in the multifaceted Ukrainian conflict.

He committed many pogroms, including when he was on the red side. But his worst outrages came after he rebelled against Soviet power, using the slogan “Long live Soviet power, down with communists, all communists are kikes”.

McGeever says the Bolshevik response to the Red pogroms has been weak and confused. This unfortunate and inadequate response can be explained by the multiple urgent pressures they were under and the mixed awareness of the Bolshevik base.

McGeever cites evidence from the Bolsheviks’ own intelligence records of anti-Semitism “within the Red Army across Ukraine, including among many regiments and brigades that did not carry out pogroms.”

He says the responses from the Bolshevik leaders were hesitant. He thinks it was not deliberate or as a result of the pressures of events, as Serge saw it, but as a result of “Bolshevik discourse” which overlaps with anti-Semitism.

There are other points where McGeever’s research disagrees with his analysis.

It highlights the role of Jewish leftists in organizing the Soviet response to pogroms and anti-Semitism. He tries to build a case that the Bolsheviks did not respond to their advance.

However, all Russian socialists, not just Bolshevik leaders, learned the hard way how to work together to manage society and combat anti-Semitism. The best of these Jewish leaders joined the Bolsheviks through their experience working with them.

Many of these Jewish Bolsheviks led exemplary revolutionary lives and were later murdered in Stalin’s purges, which is a measure of their integrity. Stalin, as Isaac Deutscher said, was insensitive to bloodshed, like a butcher.

He was also quite capable of anti-Semitism, betraying the statements and policies of the Bolshevik leadership at the time of the Revolution.

Ultimately, McGeever falls into a pessimistic underbelly, where the failures of the Russian Revolution in combating anti-Semitism become the sins of revolutionaries. In reality, anti-Semitism survived the Russian Revolution because the essential springboard of the Revolution, the unity of workers and peasants around the slogans “peace, land and bread”, collapsed under the pressure civil war and so-called war communism.

This provided the material basis for the rise of the Stalinist bureaucracy and the cultural stain of anti-Semitism that persisted.

[Brendan McGeever can be seen explaining his research here]