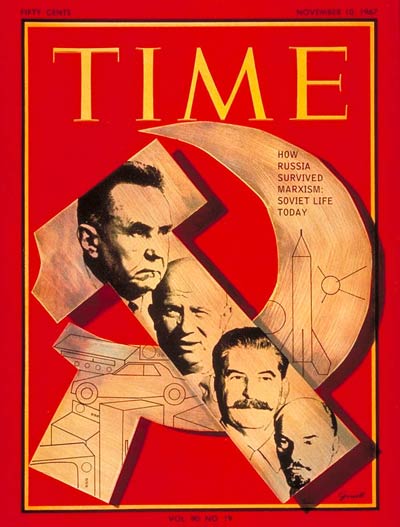 Anniversary of the 1917 Russian Revolution: This Week in History

Highlights don’t make a year. Often, it is the small news that gradually adds to the big story. With that in mind, in 2017, TIME History will revisit the entire year of 1967, week after week, as it was chronicled in the pages of TIME. Watch last week’s episode here.

As Russia marked the 50th anniversary of the 1917 October Revolution that launched the Soviet Union on its way, TIME devoted a cover story to what was happening there for America’s Cold War adversary. .

While it was impossible to deny the advances made in areas such as science and industry, and the extent to which USSR-style communism had spread around the world, it was equally true that these gains had had a cost – and that things were changing. rapidly. “Under the aegis of Prime Minister Aleksei Nikolaevich Kosygin, 63, whose hunting dog figure is better known in the West than the other two or three with whom he shares power, the government is experimenting with economic liberalization and cautiously expanding narrow limits of individual freedom and expression,” TIME noted. “Ideology, long the great pet peeve of Soviet life, is sacrificed to pragmatism to get things done.”

Which left the magazine with a few questions. Had the revolution “kept its own promises?” What were its effects on “the Russian character” and everyday life there? How did the leaders fare and what was their foreign policy?

The answer to the first question was relatively easy, according to TIME, because it would have been impossible to achieve the “restructuring of man himself” that the Bolsheviks had wanted. The second and third were more difficult, but as the fear of Stalinist repression faded, one historian pointed to a culture of “exasperation and contempt more than terror.” Quality of life was a mix, as citizens received free, high-quality medical care and education, but lived in a nation where “for all its productive power, for all its exploits in space…seems incapable of produce a door handle that always turns, a door that closes properly, a light fixture that works the first time, a toilet that flushes regularly The fourth and fifth answers were summarized succinctly because there were too many cooks in the kitchen.

What next? Although some have speculated that communism and capitalism are converging on a master system of modern governance, TIME found this theory flawed. Which did not necessarily mean a change was not coming:

And how was a story like this framed for an American publication in the midst of the Cold War? The letter from the editor at the start of the issue offers some insight – or rather, anecdotal evidence of what can go wrong. Eastern Europe correspondent William Rademaekers made two trips to Russia for the story, the first booked through American travel resources and the second through a French agency, while applying for his visa in Paris . On the first trip, nothing seemed wrong. On the second trip, Rademaekers – who spoke no French – was met at every turn by official French-speaking tour guides and, most notably, found that all the accommodation provided to him was inferior to that on the first trip. The reason given to him, when he insisted on an explanation, was one that might surprise observers focused on US-Russian political relations. American tourists, he was told, are rewarded for not complaining about the situation in Russia.

Receive our historic newsletter. Put today’s news in context and discover highlights from the archives.


For your security, we have sent a confirmation email to the address you entered. Click on the link to confirm your subscription and start receiving our newsletters. If you do not receive confirmation within 10 minutes, please check your spam folder.

On the fire: After a year of devastating California wildfires, this look at another one of those seasons is poignant. In 1967, heavy spring rains had filled Southern California with lush vegetation, which a summer drought then turned into miles of kindling. The fires have scorched more than 100,000 acres and left 5,000 people homeless.

Jackie in Cambodia: Fulfilling an old dream, Jacqueline Kennedy traveled to Cambodia to see Angkor Wat. Although she is no longer the first lady, the US government was hopeful that the warm welcome she received would be a good sign for relations between the two nations, which were more than frosty. This hope, however, will not materialize in the years to come.

Scotland speaks: Winifred Ewing’s election to the British Parliament was the first time a member of the Scottish National Party has gone this far in over 20 years. She argued for Scottish independence in 1970 – and, although she didn’t get it, the idea remains in play half a century later.

Kept secrets: As student anti-war protesters across the country tried to convince universities to stop accepting government contracts for covert defense research, TIME’s education section examined arguments from both sides. Although the moral argument against this research was much stronger, perhaps because those who disagreed were sworn to silence, some scientists may have pointed out that, as one electrical engineer put it “To know what is important in this field, you have to be in the classified aspect of it.

Great vintage ad: This advertisement for a rudimentary television teaching system gives a glimpse of how a television set and microphone could be used to broadcast interactive lessons to classrooms far away.

Coming next week: African Americans run for office and win