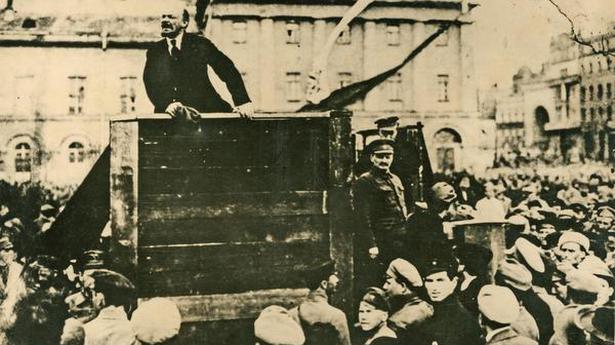 100 years of the Russian Revolution

A century ago, Lenin’s Marxist Bolsheviks took control of Russia’s imperial capital, launching the October Revolution that led to the creation of the Soviet Union.

A century ago, Lenin’s Marxist Bolsheviks took control of Russia’s imperial capital, launching the October Revolution that led to the creation of the Soviet Union.

A century ago, on October 25, 1917, the Marxist Bolsheviks of Vladimir Ilyich Ulyanov, alias Lenin, took control of the Russian imperial capital, launching the October Revolution which led to the creation of the Soviet Union. Although the Bolsheviks were in the political minority, they painstakingly planned their coup, taking advantage of a power vacuum in the country at the height of World War I.

The date of October 25 follows the Orthodox Julian calendar which was in use at the time in Russia. It corresponds to November 7 in the Gregorian calendar which is used in most parts of the world. Russia switched to this calendar after the Revolution. Petrograd was the name given to the imperial capital of Russia, Saint Petersburg, at the start of World War I, with the aim of making it less Germanic and more Russian.

The city is the site of the Winter Palace, a symbol of Tsarist absolutism which is now the Hermitage art museum. It was called Leningrad in Soviet times, but reverted to its original name, Saint Petersburg, after the collapse of the Soviet Union in 1991.

The unrest began when demonstrators, angry at the shortage of food, took to the streets of Petrograd on February 23, 1917, according to the Julian calendar. Supported by thousands of people, in just two days the demonstration turned into a mass strike and Tsar Nicholas II deployed the army. Troops were meant to contain the uprising but instead began siding with the protesters. After a week of turmoil, the last tsar abdicated on March 2, 1917, at the behest of the military, as he watched his conflict-torn country descend into chaos. A fragile provisional government led by Alexander Kerensky takes over.

After more than a decade of voluntary exile in Western Europe, Lenin returned to Russia on April 3, 1917. Although Russia was at war with Germany at the time, German authorities allowed Lenin and other dissidents to drive through Germany en route to Petrograd, in the hope that it would undermine the Russian war effort. Upon his arrival, Lenin addressed Bolshevik supporters, denouncing the Provisional Government and those calling for reconciliation with the monarchists.

In July, Bolshevik organizations were banned by the Provisional Government, and Lenin fled to Finland, returning to Russia later that year to lead the October Revolution.

Leon Trotsky, head of the Military Revolutionary Committee of the Bolsheviks, prepared the coup, posing as the head of the army. His first decision was to negotiate immediate peace terms with Germany and the Austro-Hungarian Empire.

Attack on the Winter Palace

On the night of October 25–26, the mutineer-laden cruiser Aurora fired blanks from the Neva at the Winter Palace, signaling the start of an assault on what had become the seat of the Provisional Government. Led by Trotsky, Bolshevik forces took control of key Petrograd infrastructure and government buildings before seizing the Winter Palace, which was guarded by a bewildered motley crew of around a thousand, almost without resistance. Kerensky’s attempts to organize resistance failed and he escaped. Power had changed hands.

On October 27, Lenin formed a body known as the Council of People’s Commissars – or Sovnarkom – which laid the foundations of the Soviet Union. Future Soviet leader Joseph Stalin and Trotsky were members of the council. The ex-tsar and his family, who had been moved to Yekaterinburg in the Urals after the abdication, were killed in 1918 and their remains hidden – the location of the bodies remained secret for much of the 20th century. Lenin’s government, which established a “dictatorship of the proletariat”, waged a bloody civil war against the anti-Bolshevik forces of the White Army. The Soviet Union was created in 1922 after their defeat.